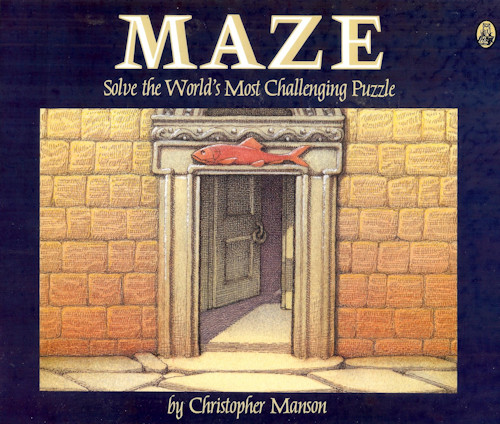 Maze by Christopher Manson is, according to the cover, “The World’s Most Challenging Puzzle”. True to the claim, nobody correctly solved it during the two years between publication in October 1985 and the close of the competition in September 1987. The $10,000 prize money was instead split between several people who all got closest to the solution.

This post takes a quick look at the book and provides the solution to finding the shortest path. You can also download an interactive map that keen Maze-solvers may find useful.

Maze is a picture book and the maze is made up of 45 numbered rooms drawn in black-and-white hatching. The style will either be to your taste or not. For me, the random contents and varied perspectives in each room are the draw rather than the artwork.

Each room has numbered doors leading out of it. The idea is that you choose a door and turn to the appropriately numbered page in order to move around the maze. Every page tells a different piece of a story of a group of people being led through the maze by a cruel guide. By following the maze from room to room you get to choose your own adventure. The story is more enigmatic than exciting or interesting and serves primarily to provide clues.

One trick to the Maze is that many of the doors do not have numbers on them. These un-numbered doors represent paths that lead into that room, but not out: the doors are one-way only. There are a few hints to this through the book. Sometimes the story confirms that rooms with only one numbered door have only a single way out, for example. There is even one dead end with no way out at all and a blackly humourous ending to the story.

The shortest path through the maze takes 16 steps leading from Room 1, to the “centre” of the maze in Room 45, and back to Room 1. The one-way doors mean that getting out of the maze once you’ve got to the centre is not simply a case of retracing your steps. 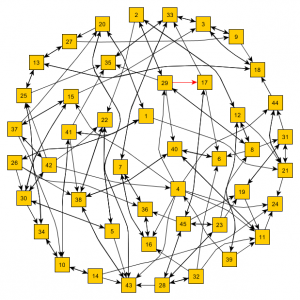 One way to find your way through the maze is to find the clues on each page that tell you which way to go next. Many of these clues are so frustratingly cryptic that I took a different approach. I chose to map out the entire book in a free program called yEd Graph Editor. You can download it here. You can draw the whole maze out by hand, but you’ll soon have lines criss-crossing confusingly all over the place and its easy to miss some important features of the maze.

Click on the image to open the full size version of the map. The source file, in graphml format, can be downloaded here (right click and save). Play around with it and rearrange the rooms to your satisfaction!

Mapping out the room was an interesting exercise and revealed a couple of important things. At first glance, there is no way to get from Room 1 to Room 45. The maze appears unsolvable.

However, the second important clue is that the number of paths leading into or out of each room is equal to the number of doors, except in one case. Room 17 has four doors but, on first glance there only three paths that lead in or out of it. The unnumbered door in Room 17 is a secret entrance and only by finding it can you reach Room 45.

Carefully scouring every page reveals that there is a door numbered 17 hidden in Room 29. This is beautifully concealed with a perspective trick, and signposted in several other ways. I’ve marked the hidden door from Room 29 to Room 17 with a red arrow in my map.

There is also an extra door in Room 39. However, this door is bricked up with a giant Jester’s hat over the top of. To me, this is a pretty clear hint that this is not a real door.

Having mapped the whole maze, yEd Graph Editor has a couple of useful features for quickly finding the shortest path. You can click on any “node” and see its “successors” in a giant chain. 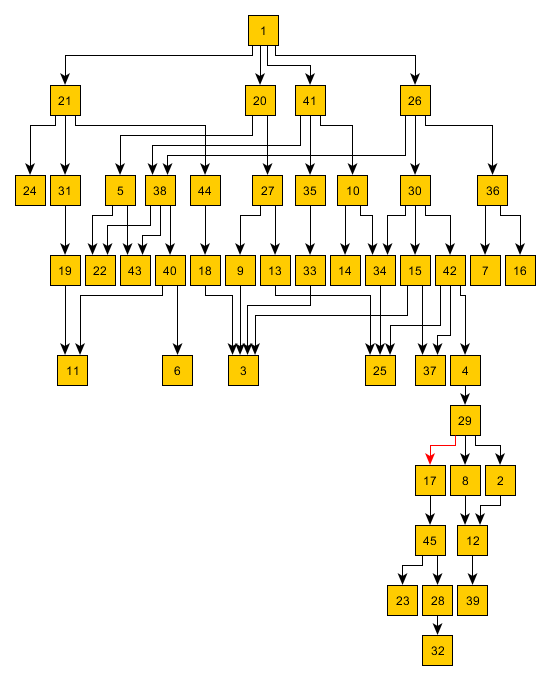 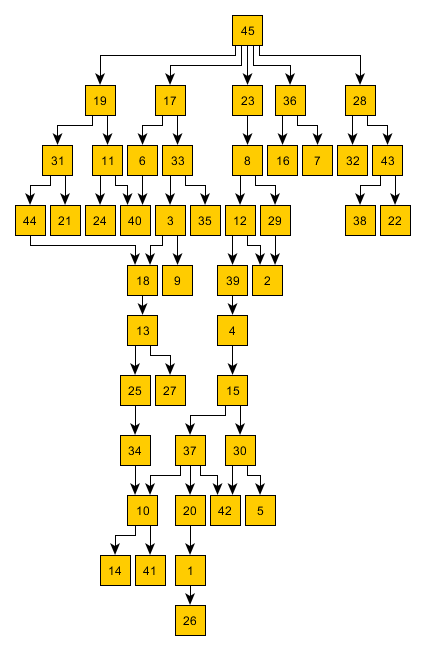 And that is the solution to the first part of the Maze. Armed with this knowledge, the next task is to see if you can find the cryptic clues that direct you along that path. Justifying answers to the cryptic clues after you’ve actually found the shortest path through the Maze is a lot easier than trying to solve the clues first.

For example, one clue in Room 1 is that there are words written above each door: Tale, Story, Yarn and Fable. These words all appear in the story text (sometimes as anagrams, e.g. “Nary”) except the word Fable. This word appears above door 26, indicating that this is the correct door. Looking for odd items out is a relatively common feature of the puzzles in Maze.

Once you’ve done that, all that remains is working out the cryptic clues to decode the riddle in Room 45 and its solution hidden along the shortest path. To be honest, this is more effort than it’s worth. The complete answer has been known for 20 years and can be found with a little Googling. It is so obscurely hidden, however, that even when you know the answer it is a struggle to understand how the clues provide it.

If you want to give it a go, here are some official clues for solving the puzzle.

First, in the original competition rules, it states that the riddle of Room 45 and its solution can be determined exactly. Although the clues are cryptic and vague, they have one clear, direct solution.

Next, as the original deadline for solving the puzzle came and went, two sets of additional clues were published:

The first clue reads as follows and relates to the riddle in Room 45:
Three things should be thrown out;
Three things come in pairs.
You’ll find two people in the room;
They must sit in one chair.

The second set of 6 clues each applied to one word of the riddle in Room 45:
1.) I’ll tip my hat if the two of you can solve this.
2.) You can get into these two shoes only if you don’t go anywhere.
3.) You will find two names on the table, and they go together like doughnut and hole.
4.) You must choose between two pictures.
5.) There are no two ways you can read this sign.
6.) You can see that another two pictures demonstrate their own kind of symmetry.